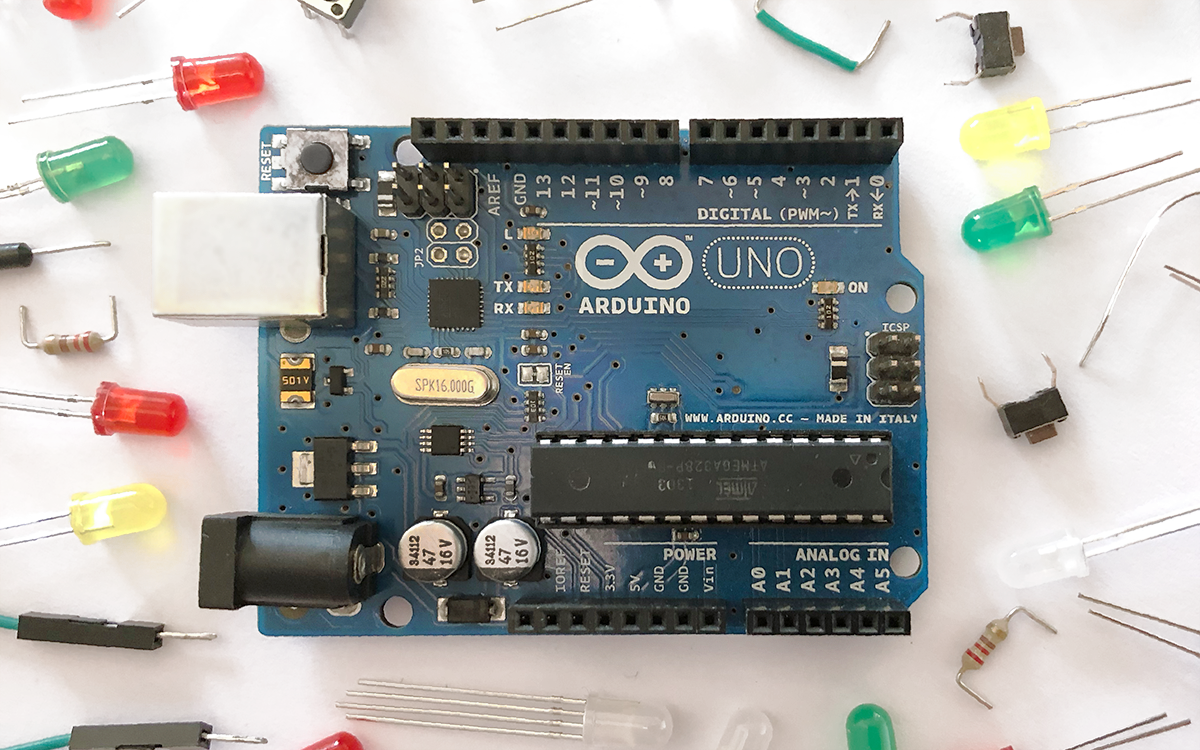 With only an Arduino you can not do much. You need a selection of different components. Breadboard, cables, LEDs, buttons, switches, resistors. The most comfortable way is to buy an Arduino Starter Kit. In addition to the price, the technical level of the user is also important to consider.

The Arduino Starter Kit* is a comprehensive set and best suited for beginners. Knowledge is clearly conveyed by the project book on the basis of projects and experiments.

In addition to the standard components such as resistors, LEDs, pushbuttons, potentiometers, a breadboard and jumper wires, the Arduino Starter Kit offers an LCD display on which text can be output, a servo and an electric motor. An original Arduino UNO Rev 3 is also included.

Arduino adds a laser cutted plywood baseplate and paper models to the Arduino Starter Kit, making the projects even more tangible and playful.

The Arduino Starter Kit costs about $76 and allows the perfect and entertaining entry into the world of programmable microcontroller. It also supports the Arduino team and the community.

Also as a Christmas gift for people from 14 years it is recommended. The Arduino Starter Kit is available in five languages including English, Spanish, Italian, French, German.

The Elegoo MEGA Ultimate Starter Kit* is aimed at ambitious beginners, who also put up with pushing one or the other project to its limits. It contains all the parts that are relevant for the entry-level and, in addition, a large number of more complex components.

The set does not contain an original Arduino, but the ELEGOO MEGA 2560 what is compatible to the Arduino MEGA board. The supplied CD contains basic instructions, code examples and required libraries.

Due to the rather complex components and very superficial instructions, this set is recommended for users with a higher level of technical understanding or with very ambitious goals.

The price of about $60 is great and more than worth it!

Even cheaper is the Elegoo UNO Project Basic Starter Kit*. It currently costs about $18 and includes an Elegoo UNO R3 board, breadboard, connector cables and a selection of standard components such as LEDs, a photoresistor and tilt switch.

For those who want to get a taste of Arduino air and are not sure yet, it offers the basic components. For the StartHardware Kitskurs this set is sufficient.

A CD with instructions, code examples and libraries is also included, but you should not expect too much here.